This was an invitation done  for an "extended" families shower coming up that my d.i.l. is hosting.  Though this would help out a bit.

The brides colours are supposed to be burgundy, white and Silver, so ran with that. 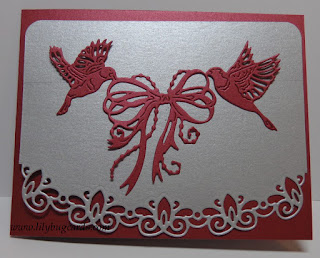 This is the invitation and it is more burgundy in actual than reddish.

Took again, the metallics and used the two colours along with a Tattered Lace die for the birds and bow, then a Marianne Border die for the bottom.

That looked a bit weird to me with square corners, so rounded off the top ones, and put them all together.  Let me say it too a few hours for the cutting as the tattered lace one has mega holes to punch out and tiny so the brush really doesn't want to do the job.  lol

Next came an inside layer on matching silver text stating when, where and so on, and again did not like the square corners so rounded off two opposite ones only on it, attached to the invites and that was it.

Next direction sheets to match and stick inside.

Now the next thing was being told that maybe reply cards would be nice, so off I went again with the dies and glue  coming up with this. 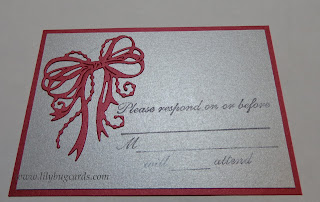 Just due cut the bows, stamped the stamp on and put clear embossing powder on the inked words and heat set.  Layered them and then made a silver envelope in the reply card size and that was it.  All done. !!

Actually the feedback has been good about them, and they really look much better in real, so all is good.

That's it.
Have a good one all and thanks for stopping by.

What a lovely shower invitation you made. So beautiful!